I heard this a million times. I even said this myself, once. I believed it.

It’s bullshit. There is nothing quite so alive as blogging. But there is something that most people do not understand and that I didn’t understand back when I said it. And that is that the blogosphere is a social network itself.

There is a reason many social networks claim they are Microblogging services (for instance Twitter and Tumblr). That is because they are closer to how the blogosphere functions than to how early social networks like Facebook work.

But let’s start at the beginning:

What Is the Blogosphere?

The Blogosphere is the community of bloggers (and their blogs). And it is a community because bloggers interact with each other. In the early days of blogging, the main audience of at least 90% of blogs were other bloggers. And to make blogging worthwhile, they would also interact with each other. They would do it manually via email if it were impossible to do otherwise. They would grow their audience among other bloggers; they would write comments purely for the sake of exchanging opinions.

They would add their favorite blogs as a blogroll on their blogs. They would subscribe to blogs they liked via RSS feeds.

And that was before it became an activity mandatory for SEO purposes. Early bloggers didn’t care that much for SEO. They cared about their voice and being heard by like-minded (and in some ways not so like-minded) people. And the creation of a community of bloggers was mandatory for the rise of blogging. Because in the beginning no one knew what blogs were apart from other bloggers.

This was (and is) first and foremost very social behavior. And the blogosphere started to create its own set of social tools around their community. They innovated the web! They are largely responsible for things like commenting systems, content management systems (like WordPress), sharing tools for content, …

They innovated the web. In many ways, the blogosphere was the first social network. Only that it didn’t have centralized servers. Every participant with a profile (or, in this case, a blog) brought his node to the net.

Bloggers innovated the web – in many ways the blogosphere was the first social network!

Then, of course, there came the rise of Google and the change in SEO. That change meant that in SEO the most important thing became backlinks. And with that came link spam. Comment spam. Automated comment bots. Etc.

Are you aware of the power of guest blogging? You can simply contact other bloggers from your niche and ask if they are open for a guest post from you – and see traffic, social media followers, new links, and even signups as a result from your guest blogging efforts.

Learn how to connect with other bloggers and grow your blog and business with guest blogging: “Write. Publish. Grow. The Ultimate Guide To Guest Blogging!” 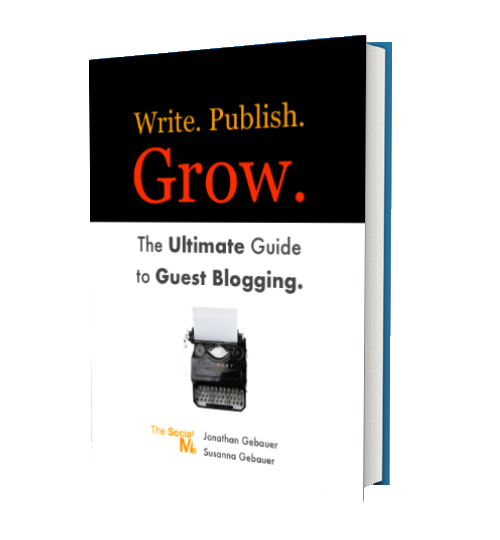 What Happened to the Blogosphere?

Many people believe that the blogosphere is slowly dying. That parts of it are evaporating into social networks like Facebook (after all, they allow for opinion exchange and are vastly popular) and that new participants in the blogosphere (meaning: new bloggers) don’t have any chance of success anymore because of the vast amounts of competition these days.

What is true is that establishing a market share in a niche with a blog today is probably harder for most of all niches than it was a few years ago. But notice that I said market share – not web traffic.

Because while competition has increased so has the overall amount of web traffic that is being generated by users all over the web.

New blogs are still being created every day, and a lot of them succeed – especially if you don’t just see monetization as the only form of success. Success for many bloggers is being heard – and if even only by a few.

The blogosphere still exists. It has grown from small to very large – and it continues to grow. The crowd of initial bloggers who just wanted their voice heard has attracted more crowds – some professional, some just in it for fun.

The interactions are still there. One of the best ways to generate traffic for a new blog is guest posting on other blogs. Commenting is still a great way to interact – it just feels right on blogs. Social Networks have only increased the options to spread the word about your blog – and they have added a whole new depth to blogging.

Somehow interacting socially via blogs just feels right. A large part of today’s increased daily content creation is done by bloggers. Yes, a lot of that content is crap, but a lot of it is also really good. Of course, great blogs don’t just rise to the top just by creating and publishing great content – but was that ever any different? Reaching out to other people is always a needed activity if you want to show something to the world. Which brings us back to how to treat the social blogosphere:

While none of this is entirely false and a lot of the time makes sense: Whenever this becomes the sole purpose of blogging, you are missing out.

Whenever you start to treat blogging as an activity outside of social media – only there as a secondary social media or online marketing activity, you are missing the most important aspect of blogging. And that is that blogging is a social media activity itself. It’s a community and audience activity.

The most successful bloggers are bloggers who bring passion into their blogging. Who not just create content for their social media audience aggregated elsewhere, but who interact with their audience within the blogosphere.

What makes this fact so hard to grasp is that the blogosphere is in today’s world scattered around the social web. The blogosphere doesn’t have its social website – they interact via Facebook, Twitter, Pinterest and many more. Last but not least, they still interact via the core element of the blogosphere: The blogs itself. There are still comments on blog posts, and most of them are valuable communications.

The blog you are reading right now was primarily built on social interactions. The success we had (see here) has been achieved almost purely through social media – which is necessary, as we are experts on social media traffic and audience generation, not SEO.

But one fundamental aspect of our approach was always that whatever we do, it needs to build an audience by itself. And that meant we had to take part in the blogosphere itself. And that means that we are not just approaching this as a secondary activity to fill our Twitter and Facebook feeds – we are creating this to become its own hub.

We value RSS subscribers as much as we value Facebook fans. We sometimes write articles in reply to other articles; we recommend other blogs to our audience. Many of those bloggers I love I don’t even follow on Twitter or Facebook – I just read their blogs. The blogosphere is a social network – even if you don’t log in via blogosphere (dot) com.

What to Do to Improve Your Social Blogging

Maybe this article was boring until now – but there needs to be some actionable advice in all this. And there is, and here it comes.

If you find that your blog is only there to feed your website with content, feed your social networks with content or improve your SEO ratings, you need to improve the following things:

Enjoy your content creation process: Content that doesn’t have the soul of the person creating it shining through is not as valuable. That doesn’t mean that your content needs to be art – but it needs to be something you have had fun to create. There are millions of pictures on Pinterest – they are not art. But they are personal.

This article was surprising for me – I could continue writing for hours. But I will stop this now.

Blogging dies on the day no one publishes blog posts anymore. And that day is far away.

Blogging dies on the day no one publishes blog posts anymore. And that day is far away.

If you liked this post, please pin it to Pinterest! Here is an image you can use: